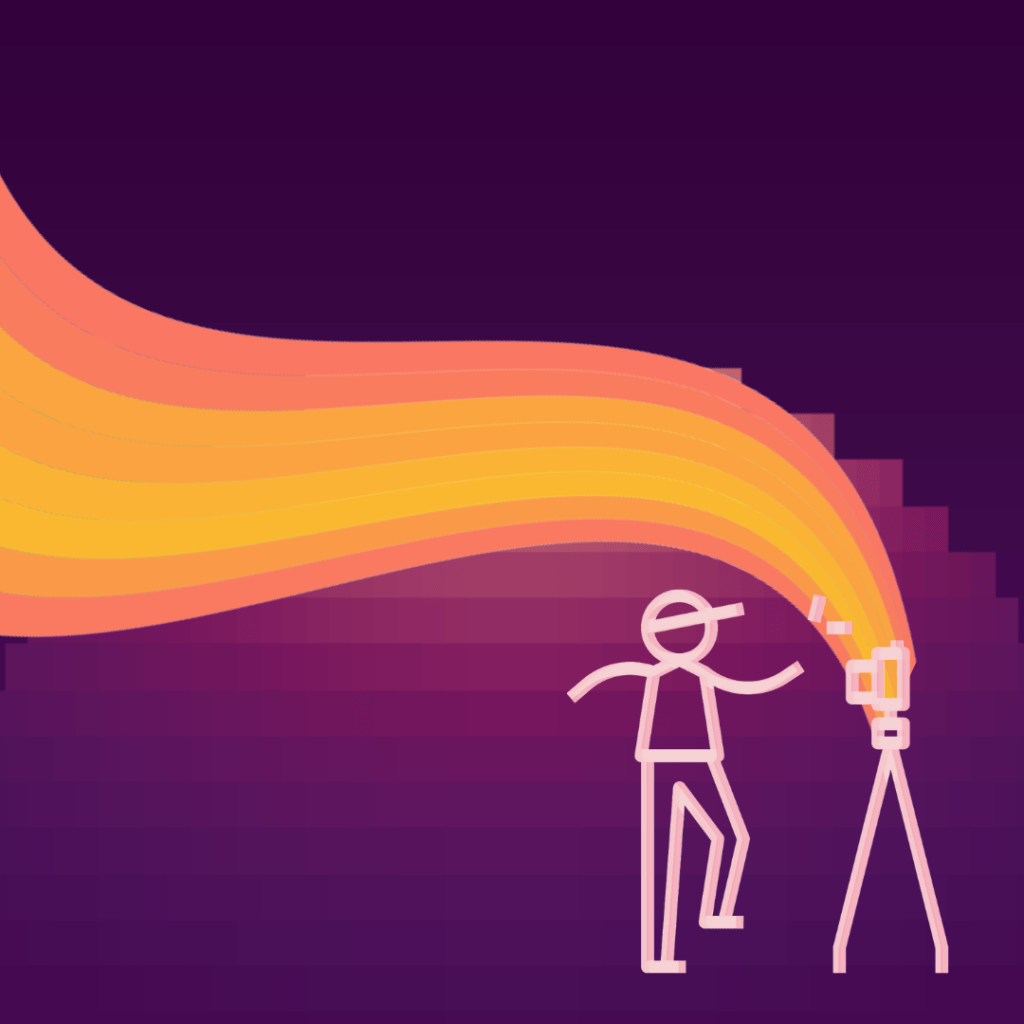 The digital age and the rise of Web 2.0—and now 3.0—has ushered in new forms of affect, public life, celebrity, and advertorial labour dependent upon platformized cultural production. And those dominating these new digital workplaces are, as a diverse collective, known as creators.

What, or who, are creators?

Stuart Cunningham and David Craig define creators as “commercializing and professionalizing native social media users who generate and circulate original content on the major social media platforms as well as offline” (1). The term is rather liberal, and it can be said to encompass anyone whose livelihood is built and depends largely upon social media platforms.

While it might seem surprising, “[h]istorically, from the perspective of its creators, the intended use of Instagram did not seem to consider the potential for individual users to reappropriate the platform for commerical intents” (Leaver et al. 103). This is indeed the case with many platforms, not just Instagram. But the reality is that enterprising social media users have learned to commodify and transform social media spaces into marketplaces for personal and professional gain.

Creators typically curate high follower-to-following ratios, post high-quality content frequently across the platforms they use, tailored to each one’s specific affordances, generate high engagement, and then use these metrics to attract marketers who will sponsor these internet figures to promote products, messages, and the like. This is especially true of influencers, but some content creators leverage relationships with their followers to transform themselves into brands, essentially commodifying their own persona and producing their own products, in addition to promoting others.

Given the visual, participatory, and communicative logic of social media platforms, platform labour often includes the development of a public persona, as is the case with microcelebrities, influencers, and most creators, in order to build a strong, recognizable presence online. Creators often develop a degree of fame in the process—for some, this social-media-made form of celebrity can encompass a fanbase of millions upon millions of devoted followers.

Unlike traditional celebrities, however, who have traditionally maintained an ethereal ideal of distance from their devotees, shrouding themselves in a veil of nebulous “star power,” social-media-made celebrities become famous precisely because of their ability to develop intimate, honest, authentic, and seemingly close virtual relationships with their fan base dependent upon (over)sharing personal details about their lives.

Along these lines, social-media-made celebrities combine affective storytelling and relationship-building techniques with other forms of platformized cultural production in order to connect with their audience, using their influence to persuade their followers and profile visitors to purchase branded items, consult a particular service, travel to certain destinations, and the like. 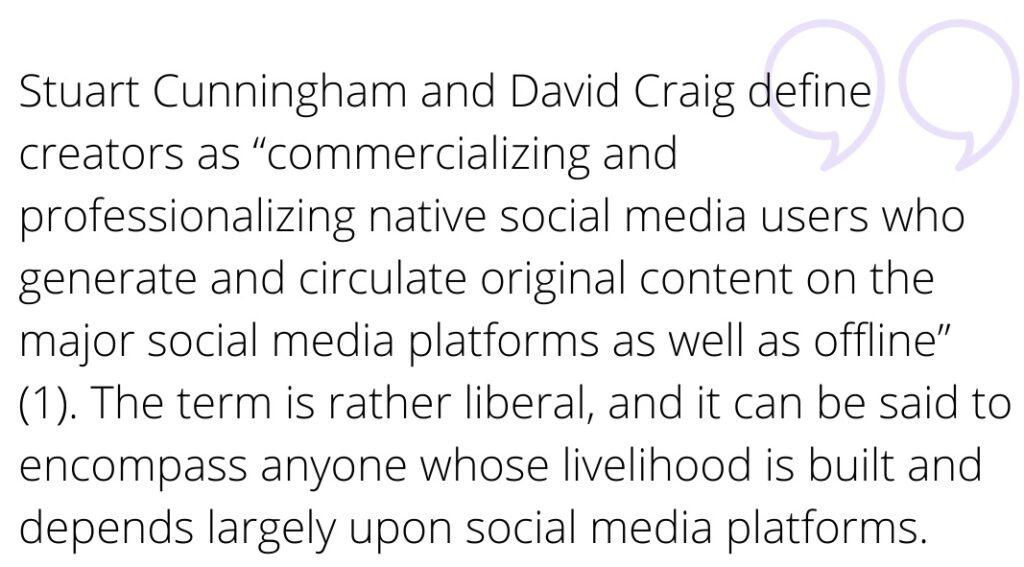 Originally dubbed “the influencer,” these social-media-made celebrities have literally used their star capital to “influence” people. While these figures have grown to amass large followings and become quite recognizable, securing partnerships with big brands once only reserved for Hollywood’s most elite movie stars, they have not had the same economic and social capital that “traditional” celebrities have. As Alison Hearn notes in “From Celebrity to Influencer,” “[r]eal celebrities do not have to tweet or post on Facebook; they can hire someone else to do this for them” (208).

But as this new labour market has grown, conditions evolved, and fame spread and multiplied, influencers have started to do much more than just advertise for other brands. Influencers are mobilizing their star capital to create their own brands, leading to a new sort of platformized entrepreneurism supported by a creator’s established following and customer loyalty.

Looking at beauty blogger Negin Mirsalehi on Instagram, for example, while her claim to fame was originally supported by other businesses paying her to model their clothes, she eventually used her clout to develop several of her own business ventures, most notably a line of honey-infused hair products now available at Sephora. Influencers like Mirsalehi have surpassed the title of “influencer,” entering the category of “creator”—that is, not just a content creator, but also a cultural and economic creator, showing how creators can launch careers that extend beyond the handheld screen.

Why should this be of interest to humanists?

Creators should be of particular interest to humanists because the increasing prevalence of these public figures represents a unique moment in time—culturally, technologically, and artistically.

As the world of social media continues to evolve, we need diverse and engaged research methodologies to uncover how these figures are impacting popular and cultural taste. Moreover, some traditional creatives, such as writers and visual artists, are achieving unprecedented levels of success by using social media to connect with an audience, share their craft, and disrupt established and often elitist institutions.

By that same token, we might even say that social media has solved the problem of the starving artist. If social media has seemingly provided a solution to that conundrum, then it is worthwhile to investigate how social-media-made artists differ from their traditional counterparts and whether the artforms themselves are affected.

What are some of the most significant issues?

Many media scholars are uncovering the ways in which platformized labour has led to particularly volatile and precarious working conditions for workers on these apps. Subject to the whims and follies of multi-national corporations, racist demonetization practices, algorithmic gatekeeping, and shape-shifting platform rules, creators are denied basic job security and workers’ rights—or even compensation—despite the fact that their labour ultimately benefits the very platforms upon which their livelihood depends. While many creators have amassed much success and will continue to do so, the platforms depend upon this success to function, make a profit, and sustain themselves—without necessarily treating those creators with much respect.

On October 4th, 2021, all Facebook-owned social media networks were inaccessible for six hours due to a global outage. Suddenly, creators who relied on these apps for their livelihood—to connect and correspond with customers, post content, facilitate payments, and more, lost all access to these services. Creators reportedly lost hundreds, if not thousands of dollars due to the communications meltdown. The underlying reality is that platform workers do not own the means of production. Thus, while the allure of being a content creator is centred on the ideal of a proud entrepreneurial spirit and building one’s own business instead of working for someone else, the reality is that content creators are not entirely autonomous if they rely on these platforms. They are, indeed, platform workers. 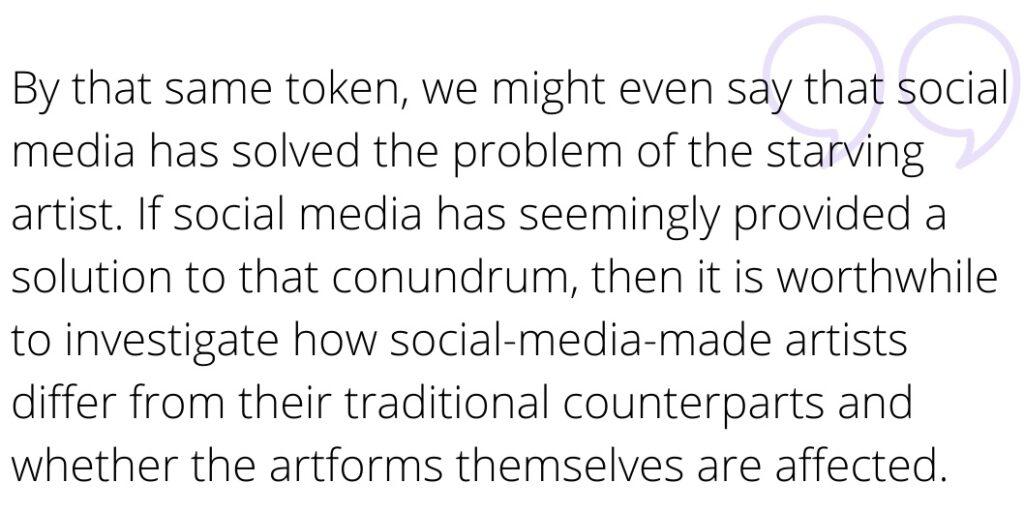 The reality is that Facebook benefits immensely from content creators insofar as their activity make Facebook a lot of profit too. Yet this reality is often underplayed. Facebook ultimately acquires and sells large amounts of data that creators create through engagement on their profiles, yet it does not compensate creators for this labour, instead offering a “free platform” that provides aspiring creators with an entrepreneurial base upon which to build their brands or businesses without overtly or materially acknowledging that the relationship is bidirectional and mutually beneficial. The reality is much the same for other platforms like Instagram (now owned by Facebook), Twitter, and YouTube.

Some people continue to think of the internet as a “democratizing” force now that gatekeepers have seemingly been eliminated: virtually anyone can create a social media page, post content, and achieve unfettered access to thousands and hundreds of thousands and possibly millions of fans. This conception, however, is a dangerous one, for there is indeed a copious amount of unpaid labour and aspirational work required to even stand a remote chance of getting there. Along these lines, while there are no human gatekeepers per se, there are algorithmic gatekeepers that ultimately affect how successful creators can ultimately become.

Moreover, those offering services traditionally not overly associated with the media or a public persona (such as hair stylists, dog groomers, realtors, etc.) have suddenly had to constantly produce, prove, and document their work in a public-facing fashion, taking up significant amounts of time and energy. Not only have platforms created new sorts of digital careers, but they have impacted careers that were not inherently dependent upon digital infrastructures before they became so pervasive.

What are the implications for popular culture?

Creators represent how culture has changed: virtually anyone can be a “producer” of cultural artefacts. In essence, the line between consumer and producer is losing distinguishability. Indeed, this new tier of celebrities—a cross between public figure and everyday internet user—can provide significant insight into the ways in which a capitalist, social-media-made marketplace is reshaping the world online and off. This insight, in turn, can also give us clues on what the future of critical engagement with popular culture looks like.